Many of the NFL’s toughest players are looking to acupuncture to stay strong and healthy. Can it help the rest of us, too?

New York Jets fullback Tony Richardson was headed to the playoffs last year when a pair of bruised ribs threatened to put him on the sideline. At 6-foot-1, 240 pounds, Richardson is one of the most successful and merciless blockers in the league. But instead of turning to the phalanx of traditional medical experts that most players have relied on for decades, Richardson puts his healing in the hands of a woman wielding tiny needles. “I’m the type of guy,” says Richardson, “I see a needle and it makes my skin cringe. But I let her stick me with 80 needles before the game so I could go get the job done.” 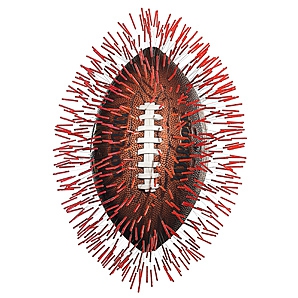 Richardson, who has been in the NFL for 17 years, credits that longevity and his quick healing time to Lisa Ripi, an acupuncturist who ministers to the fullback as well as to Miami Dolphins quarterback Chad Pennington, Pittsburgh Steelers linebackers James Farrior and James Harrison, New England Patriots defensive end Marcus Stroud, and at least 30 other NFLers. “I can point to a spot and say, ‘Lisa, can you get this, too?'” says Stroud, who sees Ripi for shoulder pain. “Before that, it used to be just ice and heat.”

Throughout professional sports, from football to baseball to tennis and track and field, a growing number of players are turning to acupuncture to treat injuries, cure musculoskeletal imbalances, relieve muscle tightness and pain, and alleviate dozens of non-sports-related health problems – including allergies, stress, depression, insomnia, and irritable bowel syndrome. In recent years, acupuncture has become more widely accepted by all of America, not just by pro athletes, as a way to treat sports injuries as well as more serious health concerns. Even the U.S. Army has started using acupuncture to help care for wounded combat vets in Afghanistan and Iraq. The American College of Acupuncture & Oriental Medicine estimates that nearly 20 million Americans have tried acupuncture, while the number of acupuncturists almost tripled between 2000 and 2010. There are currently 16,000 acupuncturists in the U.S.

Ripi’s method is a subset of traditional Chinese medicine (TCM) known as New American Acupuncture, which focuses on the release of trigger points, or hyperirritable spots in the muscle, by identifying tense
areas and inserting up to 200 needles in one session (traditional acupuncturists can use as few as three). Needling the body forces the connective tissue around the pin to contract, stimulating blood flow and releasing endorphins, which act as powerful pain relievers. Inserting acupuncture needles may also trigger the production of dopamine, a chemical in the brain that plays a part in our response to pleasure and pain, which is why some patients feel high after acupuncture therapy. According to the World Health Organization, “acupuncture’s effective rate in the treatment of chronic pain is comparable with that of morphine.”

Not only effective in easing pain, acupuncture can also help the body overcome one of the toughest hurdles to healing: inflammation. In 2010, neuroscientists at the University of Rochester in New York found that needling muscles sends adenosine, a natural stimulant for tissue repair, to the site of punctured tissue. Other studies have shown that adenosine can reduce inflammation – the cause of many physical ailments. Acupuncture may also alleviate stress, largely thanks to the endorphins that needling releases.

According to Chinese medicine, pain in the muscles and other areas of the body is the result of “static blood,” or jammed-up qi – the life force that supports the organs, blood, and the body’s metabolism. Qi flows through the body in a system of 12 meridians, or lines that connect acupuncture points, and all 12 vital organs: the kidneys, large intestine, liver, lungs, pericardium, spleen, stomach, bladder, gallbladder, heart, and small intestine, in addition to what TCM calls the San Jiao – the body’s upper, middle, and lower cavities and walls.

When these organs become fatigued or diseased, they send pain signals to muscles. “It’s just like when someone has left-shoulder and arm pain from heart problems,” says Dr. Evan Mladenoff, a holistic doctor and acupuncturist who, when hired by the Kansas City Chiefs in 1992, became the first-ever clubhouse acupuncturist. If a wide receiver suffers from a bad back, Mladenoff doesn’t examine only his spine; he looks to the hamstring and bladder meridian, too. Why? Because the hamstring is connected to the pelvis, and if a hamstring is tight, it pulls the pelvis forward, creating a tug on the lower spine, compressing the sciatic nerve, and causing a chronically painful back condition.The urinary bladder is also part of the same “tendinomuscular meridian” as the hamstring, meaning they share the same energy system. “If there is stagnation in that meridian, it’s going to keep blood from the hamstring,” Mladenoff says. Stagnation can also happen if you sit at a desk for eight hours. In that case, your hamstring is firing all day long, pulling your back muscles, and you need to release it, he says.

Though Mladenoff still treats NFL players, these days he mostly sees regular people “who are interested in human performance and want to be the best they can be at their jobs and in their lives.” His approach is more holistic than Ripi’s, as he takes into account his patients’ nutrition, health, and everyday activities, whether they mountain-bike daily or commute by car for two hours.

There are also some acupuncturists who act more as therapists than as traditional doctors. This includes New York City acupuncturist Nicholas Steadman, who sees clients for conditions ranging from anxiety and insomnia to allergies, sports injuries, and low immune function. Before he treats patients, though, he insists on knowing their emotional affect and how they feel about themselves, their spouses, their jobs, even their exercise routines. “If you exercise with a feeling of obligation or resentment, it will determine the way you hold your legs and can lead to pain and problems,” says Steadman. “Think of your posture when you’re angry: hands on hips, elbows out, neck tensed. This is your natural response to frustration and struggle – and you literally carry it in your body that way.”

Steadman first treats patients by getting them to realize how their emotional responses can cause mechanical trouble, tension, and pain. Next, if treating a running injury, for example, he needles the glutes to release that tension while sticking pins in distal points – areas far from the source of pain but along the same meridian.

For harder-to-reach, activity-related problems, such as pain under the kneecap, Steadman and Mladenoff both supplement their needling with a unique form of technology: a cold laser, or low-intensity light, that is used to stimulate deep tissue. The treatment is still considered experimental in the U.S., even though it has already been used for 30 years, mainly in Europe. Mladenoff relies on it to penetrate deep muscles that needles can’t reach. “It can actually generate new tissue,” he says.

Even without a cold laser, acupuncture’s benefits can be immediate. Eighty percent of clients feel better when they get off his table, says Steadman. Recovery continues for the next 24 to 48 hours as endorphins keep flowing and muscles rebuild.

For all these reasons, acupuncture can be addictive. Ripi has a regular Thursday night session with the Steelers’ Farrior at his home. The evening also includes several of his teammates. “The guys call it ‘spa night,'” says Ripi. But what it really may be is seasoned warriors trying to get the work done. Rookies bounce back faster, she says, while long-term pain doesn’t truly settle in until a player’s fourth season. “Some young guys won’t even look me in the eye or take a massage,” Ripi says. “It takes a couple years before they come looking for me. But they always come looking.”